This year we decided to work on the front of the house for a change.  The arbor vitae that came with the house had grown from their original 18″ to about 6-feet which is just too much for our small walkway.  And I wasn’t happy about the spider webs that seemed to form between them overnight. I do not like walking into spider webs first thing in the morning or any time for that matter.
﻿

﻿The first thing I did was convince hubby that spending an afternoon or two wrestling shrubs was going to be fun.  Of course we called 811 (Dig Safely) to have the utilities marked.  Not knowing how deep we were going to have to dig I wanted to make sure we didn’t accidentally hit the gas line or something else vital and dangerous.  Luckily we weren’t going to be digging anywhere near the gas and water lines.
After removing the shrubs the next step was to take up the grass on the small strip of lawn, of course we had to do this by hand.  For grass that didn’t want to grow it really put up a fight to stay attached to the ground. We won the battle.
The next step was widening the walkway with a row of pavers on each side, this would make the walkway wide enough for two people to walk side by side comfortably.

Once the pavers had been laid it was then time to figure out the best way to place the plants.

After trying a couple of different layouts this seemed to be the most attractive option. 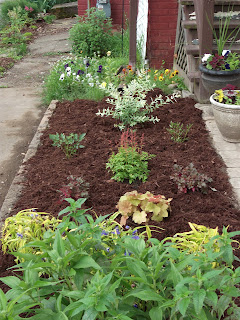 With a little fine tuning – based on where the rocks and roots were – I managed to get all of the plants in the ground and mulched.

In the end I think the front walk looks much more inviting and of course now everyone can see that we really, really need to scrape and paint the steps…..

Unfortunately after this last picture was taken we had a hot dry spell that lasted a couple of weeks and there were a lot of scorched plants, they seem to have recovered for the most part.  Since they’re all perennials I’ll just have to see how they make it through the winter.  I can’t wait until next Spring!